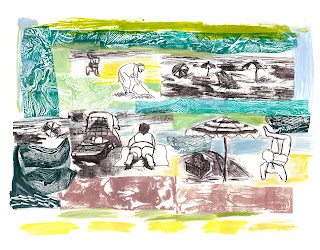 "I heard a nice little story the other day," says Morrie.  "Okay. The story is about a little wave, bobbing along in the ocean having a grand old time.  He's enjoying the wind and fresh air-until he notices the waves in front of him, crashing against the shore.  "My God, this is terrible, the wave says. "Look what's going to happen to me!" Then along comes another wave. It sees the first wave looking grim and it says to him, "Why do you look so sad?" The first wave says, "you don't understand! We're all going to crash! All of us waves are going to be nothing! Isn't it terrible?' "The second wave says, 'No, you don't  understand. You're not a wave, you're part of the ocean."  Morrie Schwartz from "Tuesdays with Morrie" as he lay dying with ALS.

If I ever feel any spirituality at all it is when I am at the ocean - my beloved ocean.  I always gravitate towards creating beach scenes because of my love for the power and mystery of the ocean. Rumor has it that I could swim before I could walk.  I was born in Miami Beach - we lived in a pink stucco apartment (before air conditioning) down the street from Biscayne Bay. Flash forward many years later to the Jersey shore - a poor substitute for the turquoise warm waters of southern Florida (but all I have right now).  I people watch at the beach, photograph at the beach, and store the images away for artistic reference. It almost appears to be a silent movie as all the activity and noise is drowned out by the roar of the ocean. People congregate in small groups, their chosen spot of real estate for the afternoon, each an isolated group within a crowd. I watch the children with their pails and shovels digging holes that quickly fill up with water, the constant and diligent watch of the parents as they struggle to keep an eye out for their kids lest they get swept out to sea, the overweight men and women spilling out of bathing suits that should have been retired long ago, and the couples walking hand in hand, seemingly still in love. I love the ocean.
Posted by jessica lenard at 2:30 PM