I was treated to a lovely weekend in Palm Beach Gardens - air fare et all.  I had known my hostess for several years., she is a wealthy and generous woman.  She had planned for me to get a massage  (not knowing that I hate them), and a facial (don't hate them). I entered the "club", was given a white terry cloth robe and rubber slippers; told to wait in the lounge till I was called. While waiting, I drank many cups of cucumber water. I was called in with the seriousness of being escorted to heaven.  The few times I have gotten a massage, the masseuse commented on how tense I was.  This time was no different. On my stomach I put my head in one of those open pillow things that allowed me to stare at the floor. She rolled down the sheet to just above my ass. - immediately uncomfortable - then a too hot oil ( gluten free) on my lower back.  The dark low-lit room with yoga music did nothing to relax me. My claustrophobia was setting in along with creeping anxiety.  Oh why can't I relax like 'normal people"??
My tension mounting.  She suggests I breathe deeply and think positive thoughts.
Breathe in  (my son is angry at me and doesn't want to speak to me).
Breathe out (I may die broke and alone) 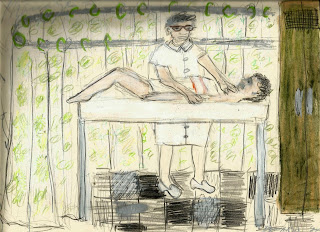 As she was escorting me out, she "thanked me for sharing my time with them today" I think I said "no problem".

The facial was less invasive.  I asked her how long the facial experience was.  When she said 50 minutes I asked if she might do 40. She explained she was putting a cinnamon enzyme on my face which might burn a little. It certainly did -I kind of felt like a Cinnabon. 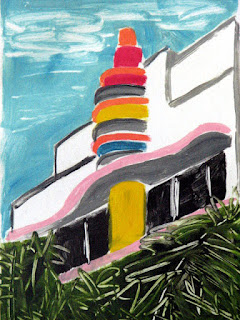 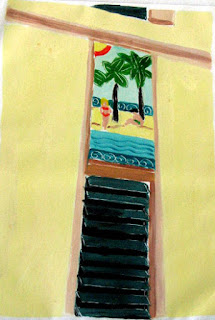 Next was the mask which became tighter the longer it was on. I finally had to tell her I would prefer to look only five years younger instead of 10 and could she please start wiping it off.
The best part of the experience was laughing with her.

We had some excellent meals:
Hawaiian sea salt crisps in a tomato bath. Was the shaved Parmesan the soap? I forgot the dollop of Sonoma goat cheese topped with ribbons of Basil.
For cocktails I experienced an organic sunshine martini (organic vodka? - I guess it could exist.)
The frisee salad had a zesty mustard and Yuzu (?) vinaigrette.
Duck wing 'lollipops' with Korean Gochujang (?) red chili glaze - with a side of creamy cheesy cheddar grits. This should be washed down with either a Monk in the Trunk Belgium or the highly recommended Cigar City Jai Alai IPA.
And, it will all be accompanied by a micro tower of Wasabi.

Posted by jessica lenard at 4:25 PM